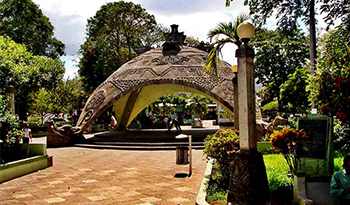 Meaning Holy Cross in Spanish, the Santa Cruz area is known for its traditionalism and customs. Discovered by the Spanish much before the rest of the Nicoya Peninsula, the area was originally called Delicias. This was until the daughter of one of the first settlers, Bernabela Ramos, put a cross outside of her house upon marrying. The locals would say a rosary when they passed, and it became a Catholic meeting place where religious worship was encouraged and mass was officiated once a month. Later, Ms. Bernabela helped to build a church in 1814 and laid the foundation for the fundamentalism that would continue for years.

Santa Cruz was declared “the National Folk City” because of its customs and colorful celebrations. The town honors its patron saint in January with dances, parties and processions. These festivities are held from January 14th to January 18th. Holy Week is also a popular time for celebrations, as Guanacaste hosts bullfights in redondels or bullrings. During both festivals, the locals play marimba music and perform the traditional Guanacaste dances.

Adventure tourism such as canopy, canyoning, and white water rafting are popular in the Santa Cruz area. The Flamingo and Potrero Marinas, located about 45 minutes from Santa Cruz, are world-renowned for some of the best deep see fishing and the areas also offer breathtaking sunset cruises, scuba diving and immaculate golf courses.

The Liberia International airports make it easy for retirees and working families alike to escape the cold weather and hustle and bustle of city life. The town of Santa Cruz is a great place for buying the least expensive groceries and consumer goods. There are many retail stores in the area, making it a great place for shopping. Businesses are also spread out through the town with all of the necessities including banks, pharmacies, souvenirs, clothing stores and much more. The area also has an abundance of places for fine dining, with both local and international cuisine available.

Santa Cruz is Located in Guanacaste. 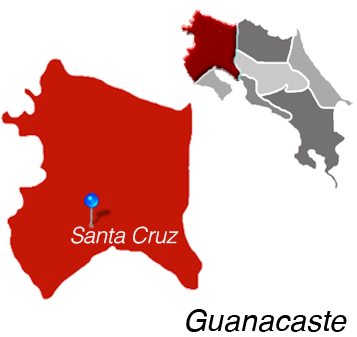 Thinking about arriving at the airport and simply renting a car? Read on.
Driving in Costa Rica - an amusing approach to driving reality

I am often told: “You are living THE life”; referring to our move to Costa Rica. Or maybe as a reaction to the joyful expression on my face. I find a similar happiness in the visitors I meet on the streets of Tamarindo.
"You are living THE Life"

Mr. Breitlander reports, "This is yet another great marketing tool that we can offer to our home sellers in Costa Rica.” He further adds, "Krain Costa Rica offers to its clients the most expansive online marketing in Costa Rica.
Effective September 1st, 2014, KRAIN Costa Rica will be utilizing the Chicago MLS (MREDLLC) to market all of their exclusive Costa Rica listings

There are so many things I love about Costa Rica that it can be quite a challenge to list them all. But the one thing at the top of my list often catches others off guard. My number one? As a 37-year-old woman living in Costa Rica? Costa Rica’s affordable healthcare.
How do I love thee, Costa Rica? Let me count the ways.
Next item